September 30, 2018
If you follow us on Social Media, you know that I (Al) came home to France in September for about 1 month + for daughter & son-in-law's wedding reception and visits with family and friends. Not to mention cuddle time with Cannelle my Sweet Cat and some various Dr. visits. Plus garage, shed, garden clean up .... In short, reconnecting with my Life!! As of this post though, I only have a couple of days before flying out. Read on for Faery News .... 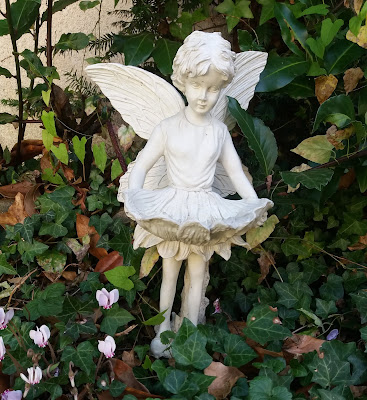 Above, the only Faery encountered while working in the garden ...
In spite of my possible drastically reduced creative time, when I discovered the September Design Challenge topic "Faery" hosted by Art Elements & Caroline Dewison I just couldn't say 'No'!!  I love faeries/fairies, gnomes and their Worlds and even have a few illustrated books about them.
I looked forward to thumbing through my book about Fées & Korrigans, acquired years ago in Brittany while on a visit to Brocéliande Forest with Peggy, and subsequently designing something around one of the creatures but alas, couldn't find the book nor my little Korrigan statue. (There's been some re-arranging, re-decorating, re-locating going on at my house in my 1.8 year absence). Perhaps the faeries?! 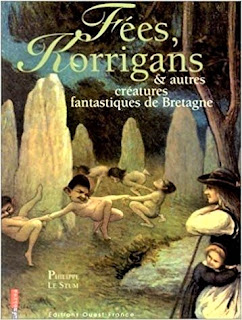 While cleaning up and out, it became evident that I wouldn't have time to play with wire, so I came up with another idea. Inspired by my small collection of Garden Gnomes or Nains de Jardin (en français, s'il vous plaît) and other decor, I decided to spin a little tale accompanied by photos.

〰〰〰〰〰   🍄    〰〰〰〰〰
Ahem! .... Once upon a time, an American found herself dropped into the Paris suburbs with 2 toddlers and smack in the midst of a newly-constructed house with a yard to re-invent from almost scratch. We'll refer to her as the Garden Faery/GF). She threw herself happily into the decoration of the house and when Winter came, proceeded to design her garden on paper with the aid of her Sunset Western Garden Book, which she called her plant bible. Being a Southern Californian, she had no idea what climate region she was in, except that the Winters were long, cold, grey, rainy/snowy and not at all what she was used to!!!

〰〰〰〰〰  🍀  〰〰〰   🌹   〰〰〰〰〰
Fast forward 20 years and the garden had hardscape, beautiful lilac trees, roses (chosen for their year, name, scent & in honor of family far away), assorted perennials and annuals, plenty of cute & fun statues & decoration and a much-needed drip watering system installed. (Garden Faery spent 4-6 weeks every Summer in the States with her small ones, and after coming home one year to dried up hydrangeas, roses and various other plant losses, she decided to react so her plants would never be thirsty again). 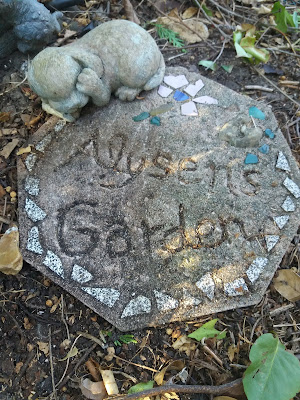 Anyway, still 20 years later .... Shortly thereafter, GF was summoned to the bedside of her ailing mother in a far-away land and decided to leave her job, garden, children (young adults by now) and Sweet Cannelle to help care for her Mom. Weeks turned into months...and almost 2 years later, she returned to find her garden overgrown and terribly thirsty after an unusually hot and dry Summer. Daughter and Son-in-Law had done their best to cut, water and tidy up throughout this time, but the plants still felt neglected and sad since GF's absence. And the new resident dog had gnawed on several watering sysem connectors so the poor plants were left to sate themselves on the spare Summer rainstorms.

She immediately started pruning and cleaning and in the process, was pleasantly surprised by visits from furtive gnomes. She was able to photograph some of them unawares ....
These two guys below were definitely not furtive nor shy.

Methinks that they scared the giant right out of his shoes! And the cats came to play ... 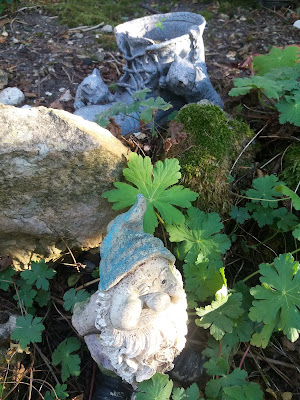 Et Voilà!
I hope you enjoyed my interpretation of this month's Faery theme. Comments are much appreciated. And please blog hop along with the links below to discover other participating artists and their creations.
Alysen