Another month has come and gone (almost) and April's Theme Challenge is Repurposing. Chosen by Lesley Watt of the Art Elements Team, this subject is really 'a propos' in today's eco-conscious society. Many people aren't yet on the bandwagon, but hopefully they'll realize the ultra-importance of recycling and repurposing for the generations to come.

Update May 1, 2019~ My Gargoyles are apparently Grotesques, but in this post, I'll continue to name them as gargoyles although now I know the difference. See image at bottom of page ..

So ... I knew the minute I saw Lesley's subject what I was going to do. I went down to the local thrift store, bought some belts and scored ... although they're under $3.00, that day happened to be a 'green' day so I got one at 50% off!!

And then Notre Dame de Paris burned!! I happened to switch on the news on April 15, & the breaking news was this. The roof was on fire and had just started about 10 minutes before. I saw the Spire fall and couldn't believe this was happening. This beautiful, awesome 850-year-old structure burning as the World watched helplessly ... . I felt my heart wrench & my soul burn as well. Paris is my adopted city of residence. Well, I live in the close suburbs, but after all these years I've become more familiar with Paris than Los Angeles. After being in a funk for a few days and while I finished up some commissions, I changed my mind about the subject of my project.

I've always been fascinated with Gargoyles. Notre Dame, Paris and France in general have an abundance of these sweet little sculptures on many older churches, monuments and buildings. In fact, at the foot of Sacre Coeur on one of the main streets there used to be an entire souvenir store with plaster replicas of different Gargoyles from said monuments. Unfortunately, this store was replaced with some food joint in the early 2000s, but I still have a couple of the statues hung on my walls at home.

I spent a few days wondering if I'd be able to properly repurpose something and then Mom brought out an old guide to the Cathedral that she had bought in 1992 at Notre Dame. That was her first and last visit to France. She'd come for my wedding, was the only member from my family and gave me away so to speak.

I digress ... anyway, in that pamphlet there were some postcards that we'd sent her over the years from France and various European cities. Lo and behold, there was a blank one with some Gargoyles  on one of the roofs of Notre Dame. Eureka! I had my muse! I wanted to make a sort of Shrine/Altar in remembrance of this tragic event. And set out to make it happen with a few ideas and a piecemeal go-with-the-flow style that is so me.

I must confess that this project is not 100% finished and when I tried to get some decent photos, it was already evening and I had to turn the lamps on. After transferring to my computer, I saw that the images were not the best they could be. I remembered to take some in-progress pix, but now I see that most are blurry. Sorry about that!

Then I gathered a couple of images from various French news sources online and I had the basic ingredients. My idea was to construct a sort of layered shadow box image. Originally, I wanted it all to be etched, but the spectacular spire on fire would be lost in 'translation', so I decided to decoupage a photo of the burning spire onto a piece of 18 gauge brass and then added a few coats of sealer.

Next, I used the Gargoyles from another image as the 2nd stage. I mounted it on a couple of yogurt lids, therefore I really did repurpose something!!

Below is the original image before any editing. This is a spectacular photo in itself, with the contrast of the darker stone and the fire reflecting off of the gargoyles. But my subject is really the Gargoyles so that's the section that I used. 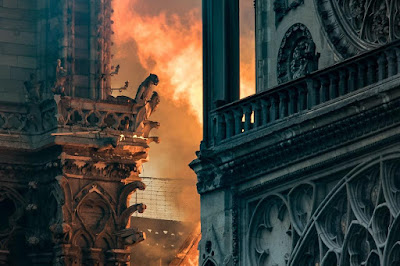 And my almost final project, albeit fuzzy and generally a bad photo. I don't yet know how I'll finish my little personal shrine/altar, but I will do it soon and post a proper image.
This Reveal is a Blog Hop, so join me in discovering what all these talented artists have Repurposed into fabulous works of art.
Al