Yes my Dearies, The Moon, 🌕  La Lune. She's always fascinated me ... So when Lindsay of the Art Elements Blog announced the January Theme Design Challenge, I was all in. I'm a July Moonchild and perhaps that's part of my partiality. As a young adult, a winking crescent moon was the logo for my graphic design biz, a few years later I added a fairy and I suppose that set the course for my lifelong connection to this magnificent, ever-changing orb. She rules the tides, farmers and gardeners rely on her and she definitely has something to do with our moods ... well, at least mine!

I knew at once what design and medium I wanted to use and had a pretty good idea of the piece. I recently delved into Leathercraft (see this post) and since January's Full Moon is also called The Wolf Moon, la voilà! 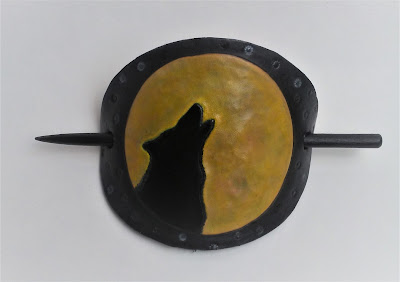 This Hair Slide, reminiscent of the good ole 1970s, is my first tooling project. I guess an experienced leatherworker wouldn't call this 'tooling', but hey, ya gotta start somewhere, n'est-ce pas? I used a Swivel Knife, Beveler, Seeder, Edge Beveler, Hole Punch (all tooling tools) and a couple of Metalsmithing tools (dappers) so I think it qualifies as a Tooled Leather piece. Not good enough that I would try to sell it, this one's for my hair only. Plus, I made it large enough for thick, wavy-ish hair, which I definitely do have (yes, even at my age😉).

The Hair Stick is from a shop I happened upon online named Many Horses Jewelry Supply where Super Sandra makes the sticks to order. I ordered an assortment of 5- and 6-inch to start with and am very happy with the quality, thickness & colors (Lilac Tree (syringa) is just striking!) This one started as a  plain 6-inch 'thin' stick. I painted it with the same black leather ink and applied an acrylic sealer. 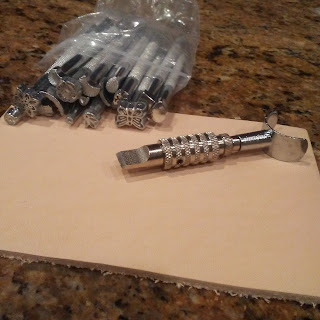 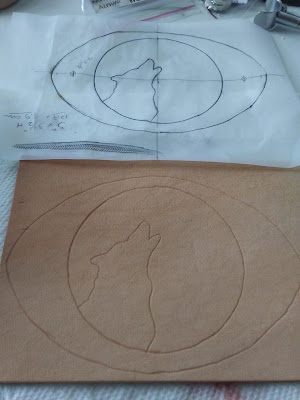 I started out with a piece of  8-9 ounce Veg Tanned Leather and maaan, this stuff is thick. I had a hard time using the Xacto knife to cut out the oval. So I finished with scissors. I need to get one of those bigger utility cutters. Actually, I'm going to try 6-7 oz. for the next Hair Slide so the Xacto may be enough (wishful thinking).
I used a simple piece of tracing paper to trace the design onto the leather using a dull point (I don't have a stylus so I used a ball point pen. It's important to case the leather (wet it) with a sponge before any cutting or tooling. Then let it dry a little. It helps the knife get deeper and when stamping or beveling, gives that luscious shading around the designs. I painted my Wolf Moon, so you don't the shading except on the 'before paint' images. The yellow is a muted mustard color, not sure if my edited color correction worked too well. 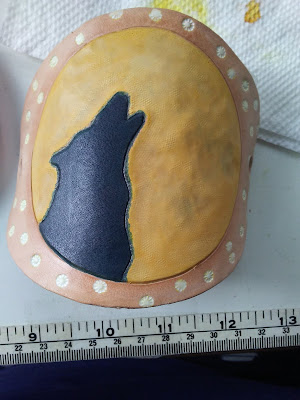 I stamped the little stars with a tool called a Seeder. I tried painting them whitish and they looked a little green, like those glow-in-the-dark ones for the ceiling. It's still a mystery to me what happened there. Before having an enlightened moment and deciding to paint the sky black, had applied a product called Leather Balm with Atom Wax over the entire piece. NOT a good move!!
While rubbing it, the paint started coming off of the Wolf & the Moon. I like the effect it had on the moon, some of the original leather color shows through and gives more dimension to it. But I did repaint the wolf & that's when the light bulb glowed about the night sky. duh.... night? ... sky? I think I've mentioned before that I'm a late bloomer and that must include parts of the brain!! 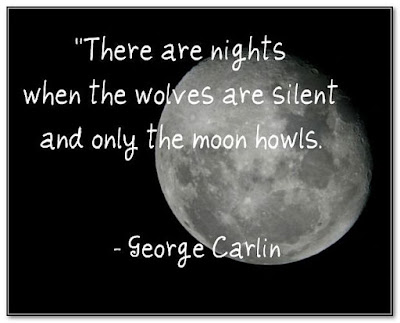 Before painting, I dipped the whole thing in water and formed it around the can of sealer, protecting the surface with bubble wrap and tape. This image is when the hair slide is halfway dry but I left it formed in the wrap until completely dry. 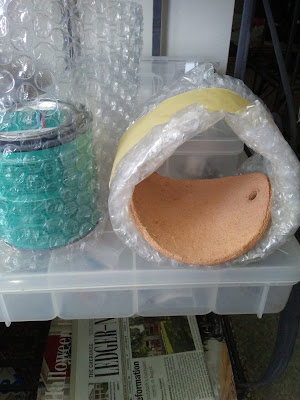 Ah, which reminds me ... I bought Leather Paint, though 'they' say that regular acrylics will work on leather but maybe eventually crack over time depending on what item is painted. Leather paint is just a thinner version and I watered them down even more. Not as much as a wash though. And then applied several coats until the coverage was what I wanted.

Last but not least, when I painted over the sky, all my little stars glowed no more! I had saved some extra watered down black and mixed a little of that with a smidge of pearl mica powder to add just a hint of sparkle and dabbed it on a few chosen 'stars'.
All in all, I'm very pleased with my little Wolfie howling his heart out 🐺.
Al

How about Blog Hopping along with me to see what all the other Theme Challenge entrants and AE regulars have dreamed up? There are A LOT this month, who can resist such a great subject?